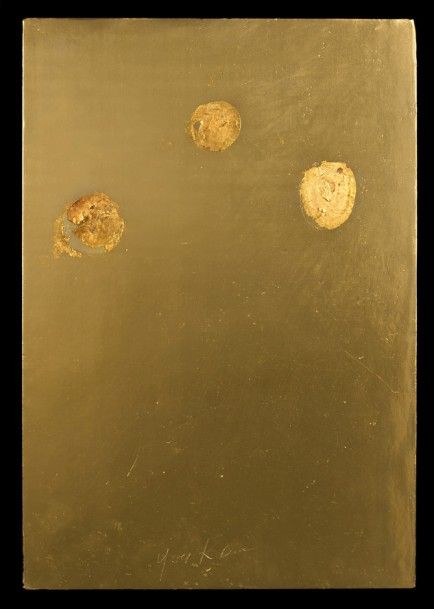 On 14 January 1961, the exhibition "Monochrome und Feuer" (Monochrome and Fire) opened at the Museum Haus Lange in Krefeld, Germany. This major retrospective devoted to the work of Yves Klein included his famous Monochromes, sculptures, sponge reliefs and "Fire Wall". On this occasion, the artist created a triptych series featuring three monochromes (blue, pink and gold), known as the Krefeld triptych, presented in the exhibition catalogue. A few months after the German exhibition, Yves Klein gave a monogold from the famous triptych to his friend Edouard Adam, a well-known paint dealer in Montparnasse, who became an important figure in the art life of Paris, according to Pierre Soulages. Soulages remembers meeting a couple of friends in the dealer's store one day, when the son stopped dead before the ultramarine. ‘This boy was called Yves Klein,’ notes Soulages in his diary, ‘and that day, something obviously happened between him and the young store owner.’  In the autumn of 1956, Yves Klein selected an existing highly saturated, matt ultramarine, with total absorption, which according to him, was ‘the most perfect expression of blue.’ His work with Edouard Adam and a chemist on fixing the luminous intensity of this blue without altering it led him to create International Klein Blue (IKB). After blue, colour of the sky, gold entered the painter's work in the late Fifties in the form of the Monogolds.
(Source: Gazette Drouot International / May 2014)

With your consent, we would like to use cookies placed by us on this site. Some of these cookies are strictly necessary for the smooth running of the site. Others are used to:

Your consent to the installation of non-strictly necessary cookies is free and can be withdrawn or given at any time.

By allowing these cookies, you agree to the deposit, reading and use of tracking technologies necessary for their proper functioning.
Read more about our privacy policy.